For our sons fifth birthday we held his party at the Mounger Pool here in Magnolia. http://www.seattle.gov/parks/aquatics/mounger.htm It is an outdoor pool with a 90 degree pool, and big water slide. Our son loves to swim and is quite the fish. He was thrilled to invite his buddies for some swimming followed by a potluck at the adjacent park.

I had found some one fish, two fish, red fish, blue fish Dr. Seuss cups in the dollar bins at Target (a dangerous section if you ask me) which started me on my fish theme. Swimming pool party and fish go together like PB and J. Of course I started combing Pinterest for some cute cake ideas and found many! I seriously considered doing a big fancy cake for his birthday such as this one from http://cakecentral.com/gallery/2290050/dr-seuss-cake or fun cake pops from http://seevanessacraft.com/2012/07/logans-2nd-goldfish-birthday-party/ 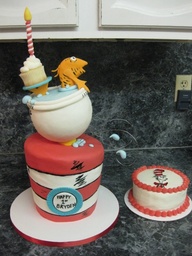 but I just couldn’t figure out how I’d actually get it done without staying up all night. (We arrived home on Friday evening from camping and his party was Sat at 3. Not only did I have to make the cake and potluck food I also needed to pick up my packet for the Danskin Tri and rack my bike.) My sanity prevailed and I decided on a much less complicated cupcake and were super happy with how they turned out. Plus added bonus our son got to help decorate them where was a fancy cake he would not have been able to participate.

My version, including “bubbles” aka left over batter for those who were not interested in such sweet treats as the fish.

Each year I have a new themed t-shirt for our son to wear at his party, last year was farm themed and this year I found this cutie on Etsy. http://www.etsy.com/shop/carefreetees